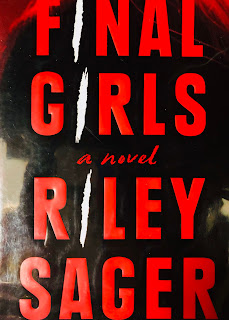 Anyone who has seen a horror film knows the trope of the "Final Girl:" the girl who survives the manic killer and makes it all the way to the end of the movie. Riley Sager's thrilling debut novel, Final Girls, plays on this trope and takes it to another level.

Quincy is the only survivor of the Pine Cottage Massacre, a devastating tragedy in which six of Quincy's friends were murdered and she was injured. Due to the trauma she suffered, she cannot remember the events of that evening, making the story of that night mysterious, scattered and spooky. She is given the name "Final Girl" by the press, placing her into a group of survivors from similar tragedies. One such survivor, Lisa, tries to contact Quincy before she suddenly dies from an apparent suicide. Quincy is devastated, but she is quickly brought out of this devastation by the other "Final Girl," Samantha Boyd. Ever since the Pine Cottage Massacre, Quincy has basically cut herself off from the world, relying on her boyfriend, Jeff, and Cooper, the police officer who rescued her from the massacre, to connect to the outside world. She has a baking blog, but apart from that her way of coping is through Xanax and grape soda.

Enter Sam. After Lisa's death, she shows up on Quincy's doorstep and integrates herself into Quincy's life. Through their shared experiences, Quincy and Sam connect on a level Quincy never thought she could find. However, Samantha is not all she seems, and she slowly brings about a violent side of Quincy, to the point where you question whether Quincy is a true "Final Girl," or something else.

Sager's style of writing makes this a quick read. That, plus the continual twists and turns (some expected, some not so expected) will draw the reader in and keep them engrossed until the very end. Sager utilizes flashbacks from the night of the Pine Cottage Massacre (told in 3rd person to portray a more omniscient narrator rather than have Quincy's unreliable memories tell the story) in order to flush out the backstory for Quincy and also make the reader question how good of a person Quincy is and whether she is hiding something. Is she lying about not remembering the events of that night, or is she purposefully denying her memories to cover up something? The way in which Sager weaves the story together keeps the tension high and the interest piqued, keeping this question at the forefront until the final pages of the novel.

Sager's characters are an interesting assortment. Quincy is a good lead, although not always a reliable narrator and does some very unlikable things as the novel progresses.  I could not stand the character of Sam; from the minute she came onto the page she grated on my nerves. The male characters are pretty good, though not as fully flushed out as the women; I would have like a little more development from them. But the best thing about the novel is the end twist: I honestly did not see it coming and was thoroughly shocked when it was revealed. The ending of this novel was definitely not predictable, and it is nice to read a thriller and not anticipate the ending halfway through the narrative.

When your favorite author endorses a novel, it's very hard to not at least try it out. Stephen King recommended this book, and I have to say that I did enjoy it. I would recommend it for anyone who likes psychological thrillers and is looking for a unique take on the genre.