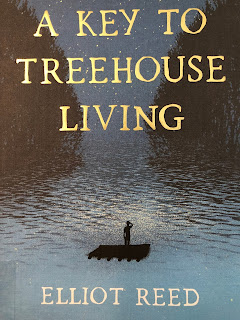 In Elliot Reed's debut novel,  A Key to Treehouse Living, readers engage with a glossary-style list created by William Tyce, an adolescent boy who is eking out his existence without parents and a [seemingly] proper guardian. After his mother dies and his father walks-out on him, William is left to live with his uncle who is as absent in William's life as his own parents. In a tale reminiscent of Mark Twain's Adventures of Huckleberry Finn, William is adamant to define the world around him. Readers will be entranced by this young man's ability to interpret the meaning of his own life, and may find that they, too, are discovering meaning for their own.

The format of this novel got my attention while browsing through the recent release shelves at my local public library. I was interested in the way that a story could be told in glossary-style and the effect it would have on the reading of the tale. When I had checked it out and started reading it on the couch at home, I realized that the format would be a challenge and a treat--one that involved comprehending a tale that is not presented neither chronological nor in direct prose.

The novel begins with an entry on "ABSENCE" which follows readers throughout the novel. The list continues in alphabetical order presenting new interpretations of the words including superstitions, discoveries, homophones, and exposition. One of my favorite entries is "BETTA FISH" where William explains the uses of the fish involving the relief of nightmares and bad dreams. It is at moments like these that readers gain a better understanding of William's life including his adolescent thinking and beliefs.

Reed's use of snapshot imagery to tell a story will not disappoint his readers. At times, the entry is brief with just one moment shared in a life whereas at other times the entry spans a few pages to really tell the details of an event that needs to be interpreted. I found that the snapshots created tension as my mind wondered at the detailed meaning and/or the full interpretation of the event at hand (see "GETTING IN CARS WITH STRANGERS"). I became concerned about William's safety and, at times, hoped that my interpretation would be wrong. In other words, the glossary acts as an experience for readers to take part in the adventure of the novel.

However, the style sometimes left me grasping at straws seeking to truly understand William's life. Later entries refer back to previous ones and to minor details that may benefit from a second reading of the novel. This could have been avoided by detailing the accounts rather than giving into vague interpretation. It is difficult to judge the writing in this case because the story is told from the viewpoint of a young man seeking meaning rather than writing for a novel. Some organic matter should be expected without explanation if the text is to stay true to its intention.

The greatest advantage of the style was that readers are able to see with the eyes of William as he explores the world around him. We find ourselves transported to a Victorian style home, in a park with other interesting personalities, down a river on a raft, and in the cars of strangers. At times, William seems like a derelict child (which he disproves with his entry of "DERELICT CHILD") while at other times he seems well beyond his years in intelligence. Readers are left to interpret the events in contrast to those of their own lives to determine the fate of William and feel for the hardships he has to endure.

I believe this to be a fine debut novel and would be interested in future releases from this author. I would recommend the book to anyone who needs a reminder of what it means to be wild and free in the formative years as it prompts readers to understand they were not always the adults they see themselves as now.