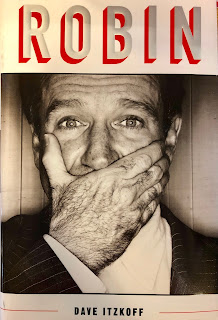 Aladdin. Good Will Hunting. Mrs. Doubtfire. The Birdcage. These are some of the brilliant films starring one of Hollywood's most revered comics: Robin Williams. His death in 2014 shocked and saddened the world and forced many fans to wonder: why? Robin always seemed so happy and jovial. What would cause him to take his own life?

Dave Itzkoff, a New York Times reporter, aims to help fans understand the man behind the jokes. His biography of the late comedian details Robin's life from his childhood where he moved from town to town, having to reinvent himself with each new school, to the end of his life and how those closest to him still deal with the effects of having Robin in their life. We get to see behind the curtain into the life of a Hollywood A-lister and the ups and downs that come with fame. From Robin's highly successful comedies like Mrs. Doubtfire and Mork and Mindy, to his career high of winning the Best Supporting Actor Oscar for Good Will Hunting, to the lowest lows of depression, drug abuse, alcoholism, and unsuccessful films. It also details his relationships with his three wives, three children, and the multitude of famous friends he made along the way.

I found this biography endlessly fascinating and entertaining and really enjoyed the way Itzkoff weaves in quotations from Robin, his friends and family, and co-stars with the general narrative of Robin's story. He begins with Robin's childhood, building upon the smallest details to create the persona that is Robin Williams. From a stern father to learning of his two half-brothers to moving multiple times across the country, Robin's childhood was hectic and erratic. Robin was a reserved and shy child, and in order to reconcile himself with the changes going on around him, he created another "Robin," the frenetic, manic comedian that became his public face. Over the years, these two personas would collide, causing Robin to suffer from depression, addiction to cocaine and alcohol, and created a confusion within the star- who am I really?

Being a Hollywood superstar, Robin knew many famous faces. Sure, we saw pictures of Robin with celebrities in magazines and newspapers, but these pictures did not tell the whole story. Robin valued his friendships, friendships that lasted his lifetime; just some of his famous friends include: David Letterman, Christopher Reeve, Billy Crystal, and Dana Carvey. He relied on his friends through thick and thin, and even to his last days he never gave up on caring for his friends. Family was hugely important and central to Robin's life, including his half-brothers that he claimed as whole family. He loved his mother deeply and started in comedy in order to make her laugh. But, most importantly, he was a loving and devoted father to his three children. His relationships with women were not so successful, but his children were the light of his life. They speak fondly of him throughout the book, remembering all aspects of their father, even the tougher bits, with honesty, respect and love.

Itzkoff keeps his assessment of Robin's life fairly unbiased; he presents the story as a story, with no real leaning of one way or the other. He does an excellent job of showing the world the two Robins: the one we all knew, the funny, erratic, hilarious comedian, and the shy, reclusive Robin. He efficiently yet effectively tracks the highs and lows of Robin's life and career, and even though the book ends with Robin's death (suicide after a diagnosis of Parkinson's, a misdiagnosis), and even though the tone of the latter half of the book is sadder and darker, Itzkoff never turns away from telling the truth of how Robin truly was. That is one word I would use to describe this biography: truthful. He lays it all out in the open: the good, the bad, the painful and the hilarious. He portrays Robin as a real human being, not as the mega superstar that the world perceived him as.

This book is an amazing read, and it moves quickly and flows with ease through the life and career of one of the world's best. I would urge every fan of Robin Williams to pick up this book and revel in the stories about your favorite movies, cry at the pain and darkness in which Robin suffered, and learn about the side of Robin he wished to keep hidden. One of the best biographies I have read in a long while.