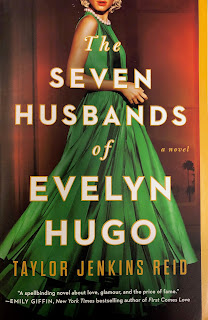 Hello all and Happy New Year! Time to start the year off with the first book review of 2019: The Seven Husbands of Evelyn Hugo by Taylor Jenkins Reid.

This novel, published in 2017, tells the story of a young journalist who is chosen specifically by a reclusive former movie star to write her memoirs. Evelyn Hugo selects journalist Monique Grant from relative obscurity to, in secret, take down her life story in order to produce a bestselling memoir. Hugo's story begins in the 1960s as she starts her career in Hollywood and weds her first husband. For the next 50+ years, she experiences the highs and lows of the movie star life and we see Hugo's career rise and fall with each new husband. By the end of her life, which frames the entire novel, she is a reclusive, lonely woman who knows how she wants her story told and will settle for nothing less. Monique, dealing with her on personal issues with her husband, learns from Evelyn how to stand up for herself and that sometimes doing what is best for you can be construed as selfish, unfair or even cruel. In the end, Monique becomes a stronger woman for having met and learned about Evelyn and can continue her life following some of Evelyn's teachings.

This book is a page turner; I was enveloped in the narrative and was hard-pressed to put the novel down at times. Those interested in Old Hollywood and how the career of a starlet unfolds will find this book endlessly fascinating. I also appreciated the news articles about Evelyn that were scattered throughout the novel; it gave it a more journalistic feel, which fit with Monique's character. And Hugo's story is fascinating, to be sure, but at times felt very unbelievable. It was hard to imagine everything that happened in this novel was happening to a single person, despite living a Hollywood lifestyle. At times, Evelyn was not a very likable character and even though she declares that she does what she wants despite the consequences, it does not excuse the hurt she causes many of the characters throughout the novel. I felt at times Evelyn was vicious just to be mean, while at other times it was necessary for her survival in Hollywood. Monique also lacked some development as we learned very little about her throughout the story. The narrative twist at the end concerning her was surprising, but it did little to make me feel more for her character. In the end, she becomes the woman Evelyn sees she can be, but is this new Monique too much like Evelyn?

Overall, it was a fun read, but not one I would readily read again. If you are looking for a quick, light story about the old days in Hollywood, this is your ticket.