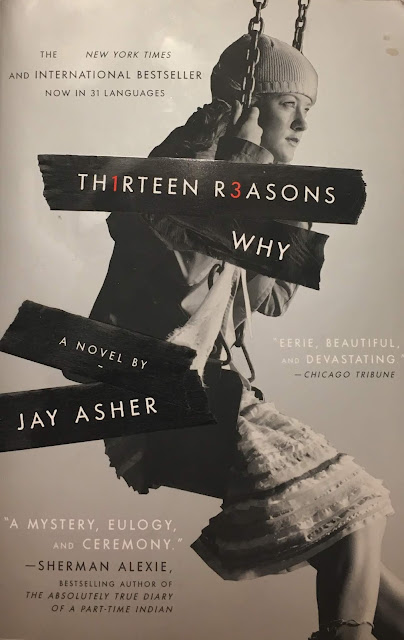 In light of the popular Netflix series, Thirteen Reasons Why, I decided to read the book (I know, I should have read the book first). Frankly, I didn't enjoy the TV series or the book. This was the most difficult novel I think I've ever read - it's not the suicide, it's the rendering of such complex, heartbreaking subjects that I found to be severely lacking.

In a nutshell, Thirteen Reasons Why is the story of Hannah Baker, a high school girl, who commits suicide. She leaves thirteen tapes for those who negatively affected her life and helped to form her decision to take her own life. Readers listen to the tapes alongside Clay Jensen.

1. There is a clear message that teenagers should not go to authority figures during times of duress. One of the people on the tapes is Mr. Porter, the English teacher and guidance counselor, on whom Hannah places blame. He tells her that if she isn't going to report a crime, then she should either confront the boy who assaulted her or "move on." I don't know a single teacher or counselor who would say this to a student like Hannah who clearly exhibited signs of suicidal thoughts. Again, no self-respecting teacher or counselor would tell a student to "move on." Here's the issue: this is a work of fiction, and the intended audience - teenagers - are often not equipped to distinguish fact from fiction, particularly in regards to serious issues like sexual assault, suicide, depression, etc. Vulnerable students with thoughts of suicide do not need to read a book that portrays adults as mistrustful - it's unacceptable.

2. There is a clear message that in order to 'get revenge,' to 'be seen,' and/or to end your problems, you must do something over-the-top. It implies that suicide is the only way to bring about change. That's the problem with this novel: Hannah's suicide isn't sad, it's cruel. The author forces his character to internalize her problems and the events within the novel only purposefully exacerbate her already-weak mental health. Furthermore, Hannah is not characterized as a girl struggling with depression, anxiety, and suicidal thoughts; instead, she is written as a hysterical, impulsive, and malicious teenager whose only method for overcoming her problems is to commit suicide and make others suffer after she has died. In fact, I believe the portrayal of Hannah is demeaning to victims of suicide and those who suffer from suicidal thoughts and/or actions.

3. The book glamorizes suicide. It says that suicide must have a reason and that the reasons must be the actions of others. The author portrays suicide in such glib manner that I was honestly revolted during reading. The book confuses humiliation with depression and suicidal ideation. Supporters of the novel and series believe that it has constructed a space for necessary conversations about suicide and its aftermath. I disagree. Yes, "everything affects everything," as Hannah says, but glorifying a successful act of suicide as a means to 'get revenge' is demeaning to those who suffer from mental health problems. The Atlantic reported a study in 2017 which found that Google searches about suicide rose 20% in nineteen after the premiere of the series. How is this in any way helpful? How has this book and its subsequent series initiated a constructive dialogue regarding such a sensitive topic?

Overall, I cannot recommend Thirteen Reasons Why - this book has so much potential in building a valuable and effective conversation, but it ultimately fails in its main goal that "everything affects everything."