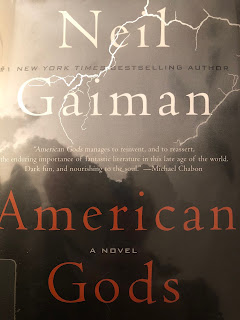 This week, I attempted to read American Gods by Neil Gaiman. I had previously read one of his book, The Ocean at the End of the Lane. I liked this shorter novel, but it didn't really stick with me. From the rave reviews and word of mouth about this Gaiman outing, I was curious to see whether American Gods would be the novel to make me a Gaiman fan.

Sadly, it has not. American Gods is the story of Shadow Moon, a recently released convict who comes into the employ of a mysterious figure named Mr. Wednesday. He agrees to work for Wednesday, being his driver and protector as he meets with numerous unsavory characters. Shadow soon learns that Wednesday and his acquaintances are in fact the Old Gods, the gods brought to America by its first settlers. He is working to stop the new gods, like Media and Technology, from becoming the predominant gods in America, making Wednesday and his friend obsolete. Shadow soon becomes involved in a war between old world versus new world, gods versus gods. He soon learns that he plays an important role in the upcoming battle, and has to make a choice about his place in the future.

Gaiman takes world mythology and spins it on its head. He reinterprets the myths of old and creates a cast of characters that one versed in mythology can easily recognize as some of the biggest legends in classical literature. He combines myths from everywhere- American, Norse, Irish, even Russian- and develops a complex and diverse group around Shadow. The most enigmatic and unlikable of these, Mr. Wednesday, is our main entry into the magical world. Wednesday is unlikable, and it is this unlikable nature that made it hard for me to connect with him as a character. Shadow works pretty well as a protagonist, but I feel like his character is one-noted: he rarely shows any emotion and as our window into this world, he does not react with any awe or disbelief with what he sees and learns. Instead, he is a very passive character, taking everything with a grain of salt and moving on. He is very flat as a character, and even when a huge character detail is revealed about him, I feel like there is no shock in his reaction. The other gods didn't seem very fleshed out to me, and in the end the only characters I cared about were Wednesday and Shadow, both of which I ended up not very invested in. Gaiman's writing style intrigued me at the start, but the story started to lag towards the middle. There were parts that truly bored me, and I found myself losing concentration and not really caring about the story. A climactic finale really did not pull the story together for me, and I honestly couldn't see why this book is so well loved.

Overall, I found this to be a so-so book. I read this one based on the hype, and I was sorely disappointed to find that it did not live up to it. A memorable premise with forgettable characters, American Gods is one I can check off my list as having read, and one I can say I won't read again. And it may be a while before I try another of Gaiman's books.