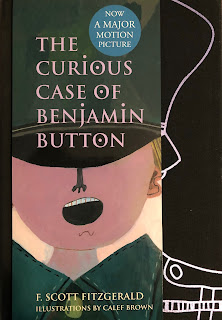 To be honest, I had never heard of this short story until I saw the film adaptation starring Brad Pitt and Cate Blanchett. I certainly did not know it was written by one of America's pre-eminent authors, F. Scott Fitzgerald. So when I saw this on the shelf, I had to pick it up and read the original text for myself.

"The Curious Case of Benjamin Button" is a short story written in 1922 and it follows the life of Benjamin Button who, when born, has the appearance and nature of an elderly man rather than that of a newborn. His face is wrinkled and covered in a long, white beard and his long, spindly legs hang over the sides of the crib. He speaks in complete sentences and has the attitude of a curmudgeon. His father stares in disbelief at his newborn son and refuses to believe the little old man is his child. His birth causes quite the sensation, and as Benjamin "grows up" (regresses in age), his life becomes a series of interesting events. He tries to attend kindergarten but is bored by the curriculum, he is not able to go to college and is laughed out of the admissions office as an elderly applicant, and he finally finds some happiness after enlisting in the army. He marries a woman but the marriage does not remain happy, as Benjamin's regression give a sharp contrast to the aging process of those around him. His son soon becomes embarrassed of him as his regression deepens, and eventually it is the son taking care of the father, except the father is now a child. By the end of the story, Benjamin forgets all memory of his life, his brain returning to the very beginning of life, knowing nothing of the outside world.

This is a very interesting story. Even though it numbers less than 70 pages, it is a complex tale. Fitzgerald takes the simple story of life, growing up and death and turns it on its head. As we watch Benjamin age backwards, we see not only the hardships of life but how much harder these are for someone who starts out life as an elderly man. No one believes Benjamin when he says his actual age, simply basing their opinions on his external appearance. Fitzgerald is clearly conveying the message that people judge others based on what is on the outside, rather than the person within. For Benjamin, this causes a myriad of problems and forces him to live a life not fully lived.  He has to experience everything in reverse; the beginning of his life is the end, the end is the beginning. He never truly feels fulfilled or loved by anyone in his family, save his wife for a few years as their ages match up. From being mistaken as his father's father to his father's brother to his son's son, Benjamin never truly gets to be himself. No one can really see him, the real Benjamin Button, and that is the tragedy of the whole tale.

Fitzgerald does tragedy well, and this story is no different. It's the first of his short stories that I have read, but it will definitely not be the last. It's a short read, yet its message is thought-provoking and incredibly sad. The film fleshes out the story a bit, and it would have been nice to have a bit more story, more development from some of the characters. However, this is Benjamin's story, and it's a wonderful story to behold. I would recommend "The Curious Case of Benjamin Button" to anyone who wants a quick, easy read in the classics genre, especially fans of Fitzgerald.