Book Review: The Mysterious Affair at Styles by Agatha Christie 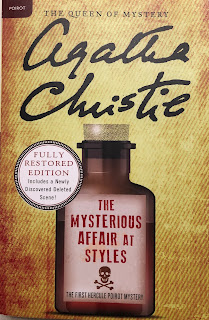 You know when you read a book, particularly the first in a series, and you know that you will gobble up the rest of the series as quickly as you can? That is the effect that The Mysterious Affair at Styles had on me.

One of my projects for this year is to try and read all of the Hercule Poirot mysteries written by Agatha Christie. Written in 1922, The Mysterious Affair at Styles is the first novel to feature her Belgian detective and would launch a series of novels that are still widely popular today. The novel is centered around Arthur Hastings who, on leave from World War I, decides to convalesce at the home of a friend, John Cavendish. While resting at Styles Court, the family matriarch, Emily Inglethorp, dies under mysterious circumstances. Hercule Poirot happens to be staying at a nearby home with friends, and Hastings, having been acquainted with Poirot, enlists his help in the investigation. Everyone in the home is under suspicion, and Poirot discovers many clues and has multiple theories about who committed the crime. In the end, the real culprit is caught and, thanks to Poirot, justice is served.

When summing up a Christie novel, it is difficult to talk about the plot details without revealing the surprises and twists she incorporates into each story. I love how Christie writes; it makes you feel as if you are part of the story, right in the middle of the mystery. It flows with ease, yet you can also tell that it is from another era (the 1920s). Her characterizations are great as well. Each character feels fully developed and she makes it easy to suspect any and all characters of the crime. She shifts the suspicion from character to character with ease, and by the end I had no idea who was guilty and who was innocent. They mystery itself is well thought out and I never unraveled the ending until it was revealed and it definitely took me by surprise. Her greatest creation is Poirot; he is so eccentric and eclectic, and you never know where his mind will take him. His interactions with other characters made me laugh and also got my mind working, trying to determine what angle Poirot was taking in order to gather evidence and solve the case. His way of deciphering the clues and creating a narrative for the case is so intriguing and he is unafraid to be blunt with characters about their opinions and suspicions concerning others' guilt or innocence.

Through this novel, I have found a new favorite author. I found this debut mystery a delight to read and such a treat. It is not hard to see why Christie is considered the Queen of Mystery. I cannot wait to read more of her novels and get lost in the variety of mysteries she has created. I would recommend this book to anyone, mystery lover or not; it is simply a great book that just happens to revolve around a mystery.