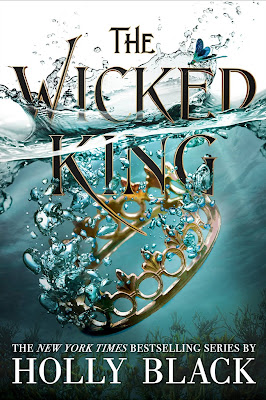 “The point of a fight is not to have a good fight, it’s to win.”

I'm at risk of going full fan-girl here because...I NEED THE NEXT BOOK. NOW. I enjoyed The Cruel Prince, but nothing prepared me for how much I loved The Wicked King by Holly Black. It took me three days to start a new book as I can't stop thinking about Jude and Cardan and the High Court and other delicious spoilers. I'm pretty sure I've been having dreams about this novel. You know that feeling when a series sweeps everyone away, where it seems like most of the country has read the book? Remember when everyone was devouring Twilight, then The Hunger Games? Well, that's what should be happening with this series. Why isn't everyone obsessed?!

Without giving away the plot of The Cruel Prince, Jude has successfully managed to thwart her father, Cardan, and the rest of the Fairies. She is in a position of power - she is the neck that controls the head, as the saying goes. Jude's role as seneschal brings anxiety (for Jude) and serious problems in abundance. The sheer number of situations Jude must manage keeps this middle novel of a trilogy fast-paced and edgy.

The relationship between Jude and Cardan is masterfully crafted; readers are never sure what's going on. Do they love each other? Do they despise each other? A bit of both? Or is it all, in fact, a sham? It's not the typical I-hate-you-but-now-I-love-you trope: there are too many factors at play to put a definitive name on this romantic nuance. Even more captivating than the relationship between Jude and Cardan is its ability to enhance the greater plot arc rather than diminish it or overshadow it. Black crafts a balance between the characters, their relationships, and the political machinations of Fairieland.

I love (almost) every single character: Madoc, Cardan, The Bomb, Oriana, Nicasia, even Locke. They each bring a unique element that, when woven together, create an intricate nexus which ultimately becomes the heart of novel. The only character I don't like is Taryn - she's so weak in comparison to her sister; she's so lifeless, so easily manipulated by the forces around her. I mean, yes, she's essential to the plot as she's Jude's literary foil. Is it assumed that you aren't supposed to like the foil of the main character? Although, I must say, I think I've underestimated Taryn (read and you'll know exactly what I mean).

I highly recommend this series, especially this 5-star jewel. I just can't believe I have to wait a year for the final installment - oh, the woes of being an avid reader!