Book Review: Work Like Any Other by Virginia Reeves 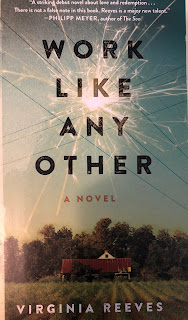 Work Like Any Other is the debut novel of author Virginia Reeves. It tells the story of Roscoe Martin, an electrician reluctantly working on his wife's family farm. One day, he gets the idea to run illegal electrical lines from the power company to their farm, hoping this will increase farm production. All goes well until the power company discovers Roscoe's illegal lines and an unwitting power company worker is electrocuted. Roscoe is promptly arrested and imprisoned for manslaughter. The story switches between two voices and two timelines: an omniscient narrator who tells the events leading up to and after the tragedy, and chapters narrated by Roscoe himself while he serves his prison sentence.

This story is all about the effect this event has on Roscoe and those around him. His wife and son basically abandon him to his fate, while his trusted farmhand, Wilson, is also imprisoned for his involvement and spends years working in the coal mines. Roscoe's one act tears multiple families apart and forces Roscoe to understand that his actions had consequences. We see his life inside the prison as he works in the dairy, library and eventually becomes a trusted guard dog trainer. He makes friends with a few of his fellow inmates and becomes close with Taylor, head of the dog training group. In his ten years, Roscoe always has a small sliver of hope that his wife, Marie, will still be waiting for him when he gets out. In the end, the relationships are what make the story so dynamic, and in the end it is all Roscoe has left.

Reeves writes a simple story, filled with rich characters that grow and evolve over the course of the story. The dual storylines make reading the novel that much more interesting, and it makes Roscoe's understanding and transformation that much more impactful. The ending leaves the reader with that same sliver of hope that Roscoe held on to during his ten years in prison: hope, that, maybe, it can all work out in the end. This book is good for a debut, and it will be interesting to see what else this author has in store.