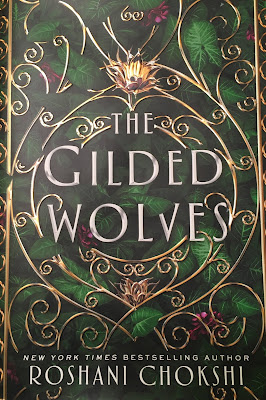 "Nothing but a symbol? People die for symbols. People have hope because of symbols. They're not just lines. They're histories, cultures, traditions, given shape."

In an attempt to keep up with what's new and popular in the book world, I decided to give The Gilded Wolves a shot. I'd heard so much praise from ARC reviewers comparing it to the shining star that is Leigh Bardugo's Six of Crows. Until Six of Crows, I'd never read a heist novel that I liked: they were drab, predictable, and set in the contemporary era. So, the positive comparisons to Bardugo's tour de force left me absolutely needing The Gilded Wolves.

I haven't decided if Chokshi's novel has lived up to the high expectations. I mean, don't get me wrong, it's good...there's something that's too much.

Chokshi's novel has multiple perspectives and dismisses common cliches and tropes found in YA and adventure and heist novels. The characters are varied, unique, fallible, and dangerously addictive. Each character - Severin, Zofia, Tristan, Hypnos, Enrique, & Laila - is written with an intensely-thoughtful background story which serves to heighten readers' emotional ties to the characters. Chokshi has crafted a character for every reader to love: brooding and vengeful Severin, socially-awkward yet delightfully genius Zofia, powerful and inwardly desperate Laila, pompous and talented Enrique, sheltered and sweet Tristan. Most of all, I love the diversity of the characters; the cultural and racial variety is real without feeling forced.

The Exposition Universelle is set to open in Paris in 1889 and the city is rife with both magic and industrial finesse. Severin, a wealthy hotel owner, is trying to win...er, steal, back his position as head of the 'dead' House Vanth. And...that's where the book loses its own source of magic created by the characters. There is an overabundance of mythology, and it makes the novel incredibly dense. I'm by no means a historian, but I know quite a bit about history and I still struggled to follow the strand of Severin's complicated pursuits(s). I'd say that Chokshi was simply trying too hard in terms of crafting the mythological bedrock for the novel; there are too many bits and pieces for even the best readers to follow. (Perhaps someone could make a flowchart).

It is a wonderful adventure-heist-fantasy novel, full of puzzles and important themes on the effects of colonialism. It's a tale of drama, politics, mystery, and intrigue with the smallest dash of romance. Despite my cynicism regarding the mythology, The Gilded Wolves is a delightful addition to YA as a whole as it seeks to diversify and enhance the genre. I look forward to the sequel!

"History is a myth shaped by the tongues of conquerors."