Book Review: Where the Crawdads Sing by Delia Owens 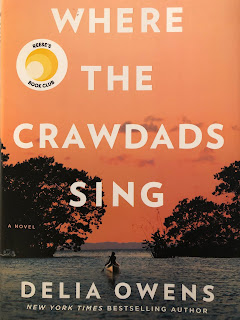 A finalist for the Goodreads award for Best Historical Fiction of 2018, Where the Crawdads Sing is a book, to me, that is actually hard to classify. Sure, it definitely falls into the category of historical fiction, but it is also so much more.

Where the Crawdads Sing centers on Kya, a young girl living in the marshes of North Carolina. As a child, her mother abandons the family, her older siblings leave home, and eventually Kya's father also abandons her. Left alone in the swamp, Kya learns to adapt to the loneliness of her new existence. She attends one day of school, but after the other children laugh at her, she refuses to return. She educates herself in the swamp on all the wildlife, eventually becoming an expert on the creatures and their delicate balance in the marsh ecosystem. She also makes a friend in Tate, a young boy who loves fishing and helps Kya learn to read. Kya falls in love with Tate; however, when he leaves for college, she is devastated to lose yet another person she loves. In her teen years she begins a relationship with the town rake, Chase Andrews, and he leads her on by promising marriage and stability. She learns the truth about his indiscretions, and he breaks her heart and abandons her, just like everyone else in her life. She takes strength from this and publishes a book on the marsh wildlife. Her brother, Jodie, sees the book and comes to visit her, bringing some joy back into Kya's life. She also reconnects with Tate, who apologizes for leaving her. She does not fully trust him, but she does forgive him. When Chase Andrews is found dead in the swamp, suspicion immediately falls on Kya, and she is eventually accused of the crime. I won't spoil the ending of the book, but let's just say that while I saw the ending coming, I was pleasantly surprised by the ending nevertheless.

Kya's story is a pitiful one. Everyone she loves and trusts ends up abandoning her. She is unable to really connect with anyone, so her strongest connection is to nature. Whenever she is upset or lonely, she turns to the marshes, finding comfort in the beauty around her. I just wanted to scoop her up and give her a hug! Her only true friend is Tate, who stands by her when she is accused of murdering Chase. He knows her better than anyone and is the only one who never truly abandons her. Owens' characterization of Tate and Kya is beautiful; their souls seem nearly one and the same, and to watch their relationship grow and suffer trials and tribulations makes it feel even more realistic. As I said, even though the ending was predictable, I still found it satisfying.

I say this book is difficult to classify because it has so many appealing aspects to it. It is historical fiction as it takes place in the 1970's; but also  is a coming of age novel about a young girl finding her place in this world and learning how to be herself. Her transformation is astounding to read; even in her darkest moments, she remains true to herself. This book is also a murder mystery, as the discovery of Chase's body is revealed in one of the earliest chapters and the rest of the narrative is told through flashbacks. We see the investigation in conjunction with these flashbacks, showing how the town and its citizens could come to the conclusion that Kya could be guilty. All of these factors mix together to create a novel that is unique; I can say I have never read a book quite like this one.

Overall, I enjoyed this book. Is it worth the hype? Maybe. It had a bit too much of a chick-lit feel to me, but sometimes one needs that in their reading. I would recommend this book to anyone who wants to read something a little different- historical, mysterious, heartbreaking and triumphant, all in one.