DOUBLE REVIEW: Circe & The Song of Achilles by Madeline Miller 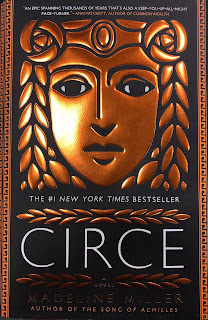 I was really hesitant to read Circe given the massive attention this book has received on Goodreads and by BookTubers in response to its release in 2018. My wife even picked up the book, read around twenty pages, and proclaimed that it just wasn't for her at the time. After hearing the hype and with a desire to read mythology once again, I picked up Miller's tale of the witch to be very surprised by the experience the text offered.

Circe is best known from her actions in Homer's "The Odyssey" where she lures Odysseus's men into her home and turns them into pigs. Then, she lures Odysseus into becoming her lover for a year  until he is released to continue his journey home. The original excerpts of the poem featuring Circe gives very little information about her and leaves much to be desired in terms of her origin story and the rationale behind her actions.

Miller's book features the life of Circe from her unusual birth. The book, heavily dependent on mythology and extensive research, gives Circe's actions purpose as she discovers her powers of witchcraft in contrast to alienation and love. The story features mythological monsters (Scylla, Minotaur, etc.) and mortals (Odysseus, Telemachus, etc.) strongly contrasting the affairs between monster and man.

Miller is a story-weaver who offers a retelling of a classic tale that explores the psyche of the protagonist. She does not forgive flaws in her characters. Rather, she makes those flaws a pivotal part of their characterization justifying reasons behind actions and exploring remorse in a way that is often not seen from the standpoint of the gods, goddesses, and demigods in the original tales. She is careful to make her reader understand the origins of the characters to transport readers back to the Greek mythos so loved by readers throughout centuries of literature.

Circe becomes more than just a witch in the story and holds more dimension than just being an outcast marooned on an island. While her tale weaves woe and remorse, it brings forward a mystery that cannot be brushed aside in light of her power and legend. Circe is a goddess who never wanted to be treated like her birthright and is as human as her reader.

While Madeline Miller's Circe may not be a book that every reader falls in love with, it sure is worthy of a read from anyone who loves Greek mythology and especially those who gravitate towards Homer's "The Odyssey."

After reading the tale, I simply could not stop and placed Miller's The Song of Achilles on hold to be read right after. 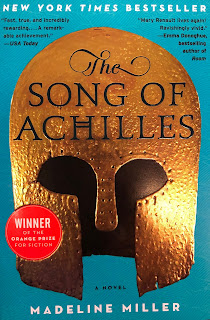 The Song of Achilles is very different than Circe. The story is told from the perspective of Patroclus who has a rather conflicting history in Greek mythology. Sometimes referred to as the cousin of Achilles while at other times referred to as the lover of Achilles, Patroclus (like Circe) has a backstory that is not explored in the original myths. However, Madeline Miller takes the time to mine literature and culture to explore the untold story of Patroclus's love for Achilles in light of the Trojan War that is prophesied as being the end of Achilles's life.

Like Circe, The Song of Achilles takes a close look at the origins of myth in that it explores the traits that evoke fame and infamy in contrast to humanity. In light of Homer's "The Illiad," The Song of Achilles considers Achilles hubris and the way that pride is damaging to the perception of fame and to personal relationships.

This story has a sad ending that is expected from the mythology surrounding Achilles and Patroclus, but the ending is redeemed by an unexpected twist that left me gasping (for air? from tears?). While Achille's actions and hubris never truly feel redeemed, they are certainly laid into perspective of his characterization and the myths of The Trojan War.

While this book was good, I feel Miller's writing has definitely shown improvement in Circe as she depends on her own use of language and rendering of events-- rather than romance and activity-- to tell a story. Circe was a quick read while The Song of Achilles was much slower for me. Could it be the content of the story and my own interest in the tale? Definitely so. Achille's story posed a tough start with the attention to the romance followed-up by pages upon pages of fighting.

Unlike Circe, The Song of Achilles wasn't a book written for me. I have never truly been interested in Achilles and never felt like he was anything other than a self-righteous warrior. Even though Miller took a shot at making Achilles feel more human, his characterization did not (thankfully) surpass the original myth losing historical and literary ambition for new-wave ambivalence. The story felt true, and I cannot fault Miller for her interpretation. However, it is still the story of Achilles thus a story not meant for readers who do not enjoy narcissistic warriors and pain.

The Song of Achilles is a book for someone who is not offended by adult themes often present in Greek mythology and literature. Likewise, I would recommend it to someone who is seeking a more modern interpretation of the Achilles story featuring what may be a unique perspective of his love for Patroclus.


P.S. A quick note... my wife decided to finish Circe after hearing my glowing comments about the book. You will just have to wait and see if she will decide to give her review of the book.