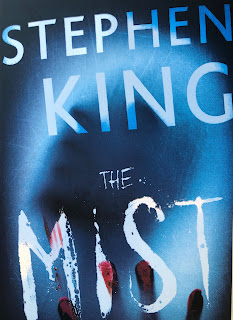 Stephen King is by far my favorite author. Whenever he releases a new work, I am rushing to the store to buy it. I have collected all of his published novels and short story collections and am working my way through them all. I decided to tackle The Mist since I figured it would be a short, enjoyable read. Boy, was I disappointed.

The Mist tells the story of David, a artist, father and husband whose home is hit by a freak storm one summer afternoon. He and his son head into town to get supplies and become trapped in the local supermarket when a mysterious mist overtakes the town. David and the other citizens trapped within the grocery store struggle to not only survive the mist and the creatures that reside within it, but also to survive one another. As society begins to devolve within the walls of the store, David tries to find a way to get himself and his son out, risking the mist and the mysterious inhabitants within it. He, his son and several of the trapped citizens make a break for it into the mist, leaving the reader to hope that they can escape it and survive on their own as the world completely changes around them.

This novella was only 180ish pages, but it was SO SLOW. It took me days to finish this short novel, having to slog through boredom and frustration in order to finish it. The opening is good and hooks the reader quickly, but once you enter the grocery store with the characters, the story really slows down. The drama that goes on within the store becomes monotonous and repetitive, and I quickly lost interest in the characters and story. Even the outlandish Ms. Carmody, a religious fanatic, couldn't keep me interested. Very few of the characters were likable, and even though I initially liked David, he does something in the story that is completely out of character and unnecessary to the plot of the story. The monsters were not very scary (to me), and it felt like some of King's weakest character development. The ending was supposed to leave readers with a sense of hope, but I was just left with a sense of frustration. The ambiguous ending gave no closure nor did it leave me wanting more; rather, it made me just want to throw the book across the room.

Overall, for a short novella, this is an ok addition to King's oeuvre. It is definitely not making any top 10 list for me, and it is one I can check off my list in my attempt to complete King's works. I have not been so disappointed by a Stephen King story since Elevation, and I probably won't read this one again any time soon.