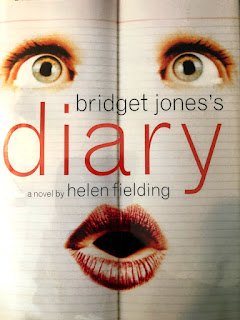 One of my all time favorite books is Pride and Prejudice by Jane Austen. I have read it many times in my life, and every time I glean something new from the text. Years ago, I discovered the film Bridget Jones' Diary and immediately recognized it as a modern-day retelling of Austen's masterwork. After falling in love with the film, I recently decided to pick up the book that the film was based upon.

Bridget Jones' Diary is, as the title suggests, the diary entries for one year in the life of Bridget Jones, a thirty year old single girl living in London, trying to navigate the hardships of dating, friendships, parents, and work. Each entry starts off with her goals for the new year: weight (she is trying to lose), cigarette count (trying to cut back), alcohol intake (again, trying to lessen), and calorie intake (in tandem with her weight loss). After follows some hilarious story about a day in her life, whether it be her fantasizing about her boss, dealing with her parents who are on the verge of a split, or helping her group of eccentric and eclectic friends, who always have some kind of drama brewing. All the while, Bridget is on the lookout for love, but she keeps looking in all the wring places. She reconnects with a childhood acquaintance, Mark Darcy, who begins the novel as a stuck up and pretentious lawyer but in the end is not all he seems.  She also ends up in a relationship with her boss, Daniel Cleaver, which turns out disastrous for her. By the end of the novel, Bridget has come full circle and realizes the year turned out to be better than she thought it would be.

From the beginning it is easy to see how this book is a retelling of Pride and Prejudice. From naming a character "Darcy," particularly one who is seemingly full of pride, to the hysterical mother and almost lackadaisical father, to the rakish Cleaver (a clear stand in for the equally rakish Wickham), Fielding does not shy away from the comparisons. However, she takes her novel even further down the feminist path than did Austen, showing how, in the end, Bridget learns to live for herself rather than for others. The dialogue is witty and fast paced, and I found myself laughing out loud in many places. Fielding write a cohesive, well thought out story that has you equally pitying and praising Bridget, laughing with her as she triumphs and crying at her failures. Fielding makes the character of Bridget real and relatable, which is great to read in a contemporary novel.  Her writing style is quick, easily readable, and enjoyable to consume.

I really enjoyed this book; I found the story and the characters relatable and charming, the plot fast-paced and hilarious, and a delightful retelling of one of my favorite novels. I think anyone who wants a lighthearted and fun read should definitely pick this one up, whether you've seen the film or not. I think Pride and Prejudice fans will especially love this one, but I would recommend this book to everyone. I may just have to pick up the sequels in the future.