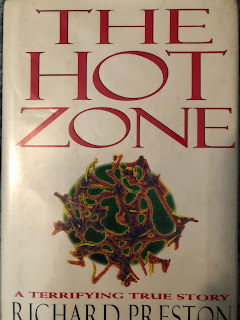 A few weeks ago, the National Geographic Channel premiered a new miniseries entitled The Hot Zone, starring Julianna Margulies and Liam Cunningham. The six-episode series was captivating and thrilling to watch, so I was happy to see that the story was based upon a book of the same name. As soon as I finished the series, I jumped straight into the book. And, boy, am I glad I did.

The Hot Zone details the incredible story of the near-catastrophic Ebola outbreak in Reston, Virginia in 1989. A containment center for monkeys being sold for medical testing was completely wiped out by a new strain of the Ebola virus, now known as Ebola-Reston. Scientists at the US Army Medical Research Institute for Infectious Diseases (USAMRIID) discovered the strain from a sample sent to them, and they originally concluded that the disease was the much-deadlier Ebola-Zaire, which has a human kill rate of 90%. Army scientist Nancy Jaxx and her husband, Jerry Jaxx, lead the team that discovers the truth about the virus and try to contain it before it can spread further. Not only does the book detail this incredible story, but it also intersperses the stories of the victims of other related viruses, such as Ebola-Zaire and Marburg, and the scientists who discovered these devastating diseases and how all of these stories are interconnected to one another. It also draws comparisons to the AIDS crisis,  the largest and most devastating viral disease to date.

I found this book endlessly compelling. Preston's writing style is very direct and to the point, which points to his journalism background. He makes the science behind these diseases and their discovery easy for anyone to understand, whether you are science-minded or not. Just reading about these diseases, how they are so simple in makeup but so destructive in nature, is eye-opening. One simple virus can wipe out entire villages and communities, and all of the forms of transmission of these viruses is still being determined. The thought that America came so close to an epidemic is scary to think about, and knowing that these awful diseases are still out there, and have no cure, is an even scarier thought. The bravery of the scientists and soldiers who dealt with this crisis is truly wonderful, and Preston puts you into the shoes of the Jaxxs, their co-workers, and others who came into contact with the illness, allowing you to feel their fear, their apprehension, and their uncertainty as they come into contact with some of the world's deadliest diseases.

This book is not for the weak-stomached or faint of heart. Preston does not shy away from all the gory effects that Marburg and Ebola have upon its victims. If that kind of thing offends you or is something you cannot tolerate, please DO NOT read this book. However, if you can stand such details, they truly are fascinating to behold. How one microscopic virus made up of seven proteins can utterly destroy a living being from the inside out in such a short period of time is absurd to think about and terrifying to understand. One of my favorite elements of the book was understanding the key players' feelings about the whole situation and how they have a job to do, yet are absolutely terrified to perform their duties. Preston sets the whole book in a reality that truly happened and could potentially happen again, making readers feel as if they are in the middle of the action and sometimes paranoid of every sneeze and cough around them.

I loved this book from beginning to end. This is my first book about infectious diseases and epidemics, and it probably won't be my last. I find the subject utterly fascinating and want to read more from Richard Preston. I would recommend this to anyone who can stand the gore and is fascinated by such topics. Its a quick and easy read, but the content may be a bit much for some readers.