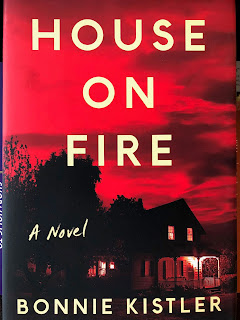 I love following Booktubers and hearing their suggestions and reviews of novels. And when it comes to new releases, I take their opinion to heart. Since several of them had suggested reading House on Fire by Bonnie Kistler, I figured I had better give it a shot.

House on Fire tells the story of the blended family of Pete and Leigh- her twins sons and daughter and his son and daughter- living happily together after five years of marriage. Pete's delinquent son, Kip, decides to attend a graduation party at a friend's house while his parents are gone on an anniversary trip. When his step-sister, Chrissy, comes to the party and informs him their parents are returning early, she and Kip abruptly leave the party. Kip, drunk and driving on a suspended license, runs off the road and crashes into a tree. Kip is arrested and charged with smaller crimes, ones that his lawyer feel he will be able to overcome. The next day, Leigh, a divorce attorney, is meeting with a perspective client when she receives a call. She rushes to the hospital but it is too late: Chrissy has died of a brain aneurysm.  The police show up at Chrissy's wake and arrest Kip for manslaughter- the doctors claim that she died because of a head injury from the accident. From here on, the story progresses into how the family deals with this situation, particularly since Leigh's biological child was "killed" by her step-child. Kip then makes a revelation: Chrissy, a fourteen year old with little driving experience, was the one driving the night of the accident. Through it all, Leigh deals with the separation of her family, several interesting clients, and coping with the loss of a child.

I found the beginning of this book very engaging. I was instantly drawn into this family and their dynamics. All of the protagonists were characterized very quickly and the plot moved at a fairly good pace. However, once Kip reveals the secret of who was really driving, the story seems to slow. Leigh's story divides off into subplots involving her clients, some of which were unnecessary and quite frankly boring. Pete and Leigh's story was much stronger when they were a united front, so separating them weakens the plot and makes the pace of the novel drag. The characters also become more unlikable as the novel progresses. I particularly did not like Kip to begin with, but as the story goes on, he becomes more and more selfish and arrogant. Leigh's older sons barely get any time on the page, and when they do they are nearly useless plot devices. The same goes for Mia, Pete's daughter, whose big moment comes in the last pages of the book.

My biggest problem with the book is the ending. The last act of the novel takes a sharp turn from a domestic story to a mystery thriller. I won't spoil it, but it involves a ridiculous plot with Leigh and one of her clients. The turn is completely unbelievable, and the rapid pace at which the plot picks up makes the story seem rushed and forced. And then, the happily-ever-after denouement of the story. Again, what happens is unbelievable and out of character for Leigh, and honestly does not seem realistic. I slammed the book closed in disgust and disbelief, really wishing the novel had turned out differently.

Overall, I enjoyed the beginning of this book, but as the plot slowed the novel took a sour turn for me. An unbelievable ending only added to my disappointment in this book, one I had such high hopes for. I can't say that I would recommend this book to anyone, unless this book sounds like something you would be interested in. A simple case of the hype not being with it, House of Fire was definitely the biggest disappointment of my reading year (so far.)