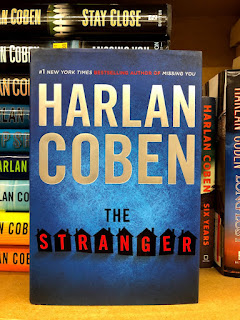 Earlier this year I discovered a new favorite author in Harlan Coben. His stories were offering everything I needed in the mystery genre: suspense, a thrilling pace, interesting plot points and characters, all of which makes me gobble up his books as quickly as I can. So when I heard The Stranger is being adapted as a Netflix drama, I had to read the book first.

The Stranger tells the story of Adam, an attorney, husband and father to two teenage boys. One night, while at a local bar, a stranger approaches Adam and reveals that something his wife told him, something life-altering, was in fact a lie. Upon hearing this news, Adam then has to decide whether to confront his wife about her lie. Once he does, she disappears, and Adam becomes entangled in a web of lies, murder, and chaos he never thought possible. The novel takes a few twists and turns before coming to a shocking conclusion, changing Adam's life forever.

I'm not going to lie: I did not like this book as much as some of his other mysteries. The plot was slow to start and slow to unfold, which was unlike the Coben books I had previously read. I enjoy his fast-paced, quick-moving plots, so to find one that was so slow and did not really hold my attention was disheartening. I was also not impressed with any of the characters; they all seemed like run of the mill thriller tropes with very little development throughout the story. Adam was not a very compelling lead character, though he did try so hard. Corinne was unlikable from her first appearance, but that was to be expected since Coben revealed her deception on the opening pages of the book. Still, once she went missing, I didn't really care whether she came back into the story or not. I did feel sorry for Adam, who did try so hard to make everything make sense; the ways he went about it, though, was not compelling to me. The tension just wasn't as strong as it usually is, and the book built to a lackluster and unsatisfying ending.

That being said, I still enjoyed this book. Coben's books have a way of getting you into them; its the keeping you interested that this book lacked for me. Even though this was not my most successful outing with a Harlan Coben novel, he is still, for the moment, my favorite thriller writer and I can't wait to dive into another of his books. If you are just starting with Coben, I would suggest checking out one of his other books and leaving this one for later. I feel though, you will still find it enjoyable, just maybe not as enrapturing as his other mysteries.