Book Review: With the Fire on High by Elizabeth Acevedo 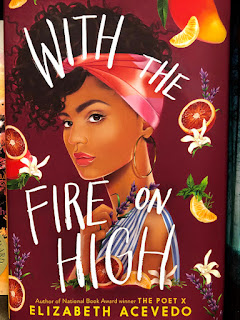 This summer I decided to try out a genre I have not had much luck with in the past: Young Adult. I'll be the first to admit that there are few YA books that I truly like. But every once in a while, I find one that I am drawn to. The cover alone on this novel was calling out to me, saying "Pick me!" off the library shelf. So I decided to take a leap of faith and dive back into the YA genre.

With the Fire on High, written by Elizabeth Acevedo, tells the story of Emoni, a high school senior who is also a single mother, living with the grandmother who raised her. Her mother passed away when she was born, and her father, unable to raise a child on his own, leaves Emoni with his mother and goes home to Puerto Rico. As she enters her senior year, the time to decide what the future holds is upon her, and Emoni must make some decisions regarding not only her future, but that of her daughter as well. Emoni's most passionate hobby is cooking, and when a new culinary class opens up at her high school, she signs up for it. However, it turns out to be something different than she expects, and it becomes further complicated when a new male student transfers to her school (and her culinary arts class) and makes it known that he likes her. As a single mother whose relationship with her child's father is tenuous at best, she is wary of becoming involved in any kind of relationship. When the opportunity to study in Spain for her culinary arts class comes available, Emoni panics about if she can even go, and if so, how she will pay for it. As she navigates these tough decisions and relationships in her life, she realizes that she is becoming an adult and just how scary that prospect is. In the end, Emoni's story ends happily and her future looks very bright.

I really enjoyed this book. Acevedo writes in an easy to read style that is not too sophisticated but also not too simple. She makes her characters feel very real and their situations are situations that lots of young adults may encounter as they mature into adulthood. Emoni is a great protagonist, and Acevedo is not shy about showcasing both her successes and her failures, her merits and her flaws. Her book is also full of diversity, with characters from all races, ethnicities, socioeconomic backgrounds, sexualities, and cultures represented in the text. The story itself is simple: its the story of a girl learning to grow up. But the added layers and complexities that Acevedo adds makes this such a richer and deeper story. I will say it did feel a bit rushed, putting an entire school year into one novel; however, the plot never faltered or got boring. The story continued to move and I kept turning the pages, eager to see what happened next to Emoni and her friends and family.

Overall, I would readily recommend this book to teens. It contains characters, situations and relationships they can relate to and understand while also not downplaying the seriousness of the issues discussed. I would also recommend this to adults looking for a novel that can give them some insight into the lives of modern day teenagers. I hope that Acevedo writes another novel; if so, I will happily and eagerly pick it up.