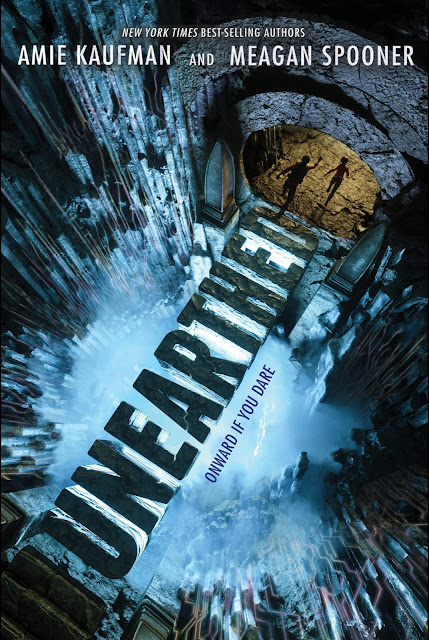 "We may be the only ones who think that braving a series of crumbling death traps is proof of good decision making."

Unearthed, written by Amie Kaufman and Meagan Spooner, is such a strange mix of genres. It's science fiction, young adult, romance, adventure, heist, and just...strange. I'd been craving something outer-space-y and kept seeing Unearthed pop up on my Goodreads, so I thought, why not? It was being described as a mix of Lara Croft and Indiana Jones with an alien twist. You know when you just need to read without thinking? Then, Unearthed is for you. It's compelling enough without requiring too much effort.

The main characters, Mia and Jules, are the typical 'opposites attract' with Mia being a desperate scavenger and Jules the son of an infamous scholar. The authors have written really solid characters - Mia is a very hands-on thinker while Jules is more language-minded and so, together, they easily conquer the puzzles, tricks, and tasks in front of them. The dual first-person perspectives allow readers to envision the planet in all its newness, otherness.

Jules and Mia have divergent reasons for being on Gaia, the former home planet of the 'Undying.' Jules is there as a scholar: the Undying left temples rife with traps along with some serious technology. He wants to study the culture, the evolution, the artifacts of the alien species, but is in a race against scavengers bent on desecrating the ruins...all in the name of tech. Mia, on the other hand, is a scavenger who must find tech good enough to get her back off Gaia and free her sister on Earth who is the equivalent of an indentured servant.

This book is neither bad nor good, if you like to categorize in such terms. It does have insta-love between two teenagers, and it also has unique mixture of genres and readability. While I would not consider this a 're-read,' it is still enjoyable, suited best for late middle school students and high schoolers.

"Humans exceed themselves when they open their minds to discovery," my father said, that first night. "When we immerse ourselves in the wonders of curiosity, rather than moving straight toward the goal we've chosen. Toward the goal we imagine is the most important, because it's the only one we can see. When we allow ourselves to explore, we discover destinations that we never on our map."