Book Review: Crisis in the Red Zone by Richard Preston 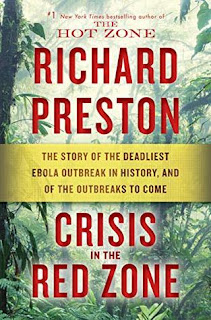 Having just recently read Richard Preston's hit book The Hot Zone,  I was excited to see that he was releasing a follow up dealing with the recent Ebola outbreak in Africa in 2013-2014. I loved The Hot Zone  and had even watched the National Geographic miniseries based upon the book. However, I must say I was deeply disappointed in Preston's newest Ebola story.

Crisis in the Red Zone tells the story of the recent spread of Ebola through Africa, particularly in Guinea and Sierra Leone. Starting with the death of a small child, the Ebola virus quickly devastates many small villages and kills hundreds of people. As health officials worldwide become aware of the situation, doctors and scientists are sent in to try and contain the disease before it becomes a global pandemic. Scientists also try to discover the origin of the virus and realize that once it enters humans, the virus spread and mutates at an extraordinary level. Preston delves into the lives of those on the ground in the hot zones, from the doctors and nurses watching as patients suffer horrible deaths, to scientists in labs in the US, searching for answers. Some of these people do not survive the outbreak, and all are changed forever by the horrors they witness in the red zone.

One thing I liked about Preston's book The Hot Zone was his ability to make us care about the people in the two main storylines of that book (the doctors in Zaire and the Jaxxs in Maryland). Again, in this book, Preston gets us to care about the people involved in this crisis; however, there are TOO many people to have to keep up with and care about in this book. He follows many characters, flipping back and forth between their stories from one paragraph to the next, and it makes it very difficult to remember who is who and to keep up with a streamlined narrative for each character. I feel this book would have been much clearer had it followed only a few characters that we can easily track through the entire book rather than quickly bouncing from one character to the next to the next. Preston also goes into significant detail about almost every topic in this book. While I appreciate the detailing of the virus and how it is composed, how it works and how it spreads, not everything that is discussed needs an extended explanation. I feel he gets bogged down in the details, repeating himself numerous times about unimportant facts, and forgets to get back to the main idea; I found myself becoming very bored as I read this book. For a story that is so horrifying and real, the way in which it is presented is meandering, slow-paced, and exhausting.

This book is a scary read, like Preston's other works, and the fact that this story is a true story makes it all the more terrifying. I appreciate Preston bringing this story to light; I just wish it had been done in a more cohesive and thrilling manner.

My thanks to Random House and Netgalley for providing this ARC of Crisis in the Red Zone by Richard Preston.