Book Review: A Curse So Dark and Lonely by Brigid Kemmerer 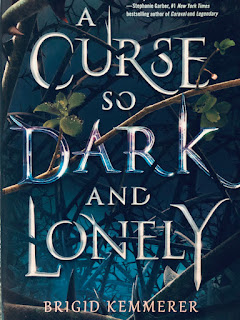 Ever since I was a little girl, I have always loved fairy tales. I spent many a day in my childhood watching Disney adaptations of some of the world's most famous fairy tales, from Sleeping Beauty to Aladdin to the Little Mermaid. But no story resonated with me so soundly as Beauty and the Beast. I completely related to the character of Belle, a bookworm who feels she does not fit in with those around her. The story of loving someone for who they are within is a timeless tale, and it is by far my favorite fairy tale. But I had never read a novel that was a retelling of this beloved story and I am usually wary of such re-imaginings.  But the cover on this book was so beautiful and the premise hooked me instantly, so I decided to pick up A Curse So Dark and Lonely.

This dark retelling of Beauty and the Beast depicts the story of Harper, a tough girl from Washington D.C. who feels like no one around her treats her as anything more than a kid. She feels stifled by the over-protectiveness of her older brother, Jake, and the life of crime he has become a part of. Her father has disappeared and her mother is dying from cancer. Harper really has no one to turn to or confide in. One night, as she plays lookout for Jake, she sees an attempted kidnapping and tries to stop it. The next moment, she is waking up in a medieval castle, surrounded by all the finery of royalty. The music that fills the castle plays by magic, having no musicians to pluck the instruments. As she tries to escape, she meets her "captors": Rhen, the crown prince of Emberfall, and his loyal guard Grey. She soon realizes that the castle is under a dark curse and Rhen and Grey are the only humans left in the castle. A hideous monster terrorizes the kingdom, killing those in its path, and the curse can only be broken if the prince can fall in love. After trying for over 300 seasons (or five years), Rhen is told that this season will be his last. Over the course of several months, Harper and Rhen grow closer, and there seems to be a spark of hope for the curse to be broken. But with the threat of invasion from a neighboring kingdom and a dark secret that Rhen keeps looming over them, failure almost seems like an inevitability. If you know the classic fairy tale, you know there is a happy ending. I won't spoil for you here whether Kemmerer chose the same fate for our main characters.

This book is great. It is highly engaging, fast paced, and a timeless story retold in a manner that is inventive and new. This story is very low fantasy, so don't worry about understanding a complicated magical system; the curse and the magic surrounding it is direct and easy to comprehend. Kemmerer does a great job fleshing out all of her characters, and by the end of the novel you are on the edge of your seat wondering about each character's fate. Her writing style is concise and easy to read, and she is not overly flowery or romantic in her writing. I also loved that she gave our heroine another challenge to overcome: cerebral palsy. Harper struggles with her limited movement in some instances, but she never succumbs to using her sickness as a weakness; she accepts it as part of herself and others can like or not, she does not care. Harper is not so much a bookworm as Belle was, but she is a strong, independent woman who would rather ask forgiveness than permission. Rhen can at times be arrogant, but it is easy to see that he has evolved and grown as a person the longer the curse has a hold over him, and by meeting Harper he finally sees someone who challenges and excites him, even though he is less than hopeful for any romantic feelings from her. Even the guardsman, Grey, is given a dynamic characterization and he became one of my favorite characters by the end of the story.  And the little twist at the end of the novel was unexpected but a great cliffhanger to leave the reader wanting more.

Overall, Kemmerer has created a world that I can't wait to revisit. Its fun, exciting, and yet also a bit familiar. As my first retelling, I would say this book delivers on everything and leaves the reader wanting more. I zoomed through the pages of this book, staying up late to see it through to the end. I imagine many others will do the same. I would highly recommend this book to any Beauty and the Beast fans and anyone who likes a solid, fun story.