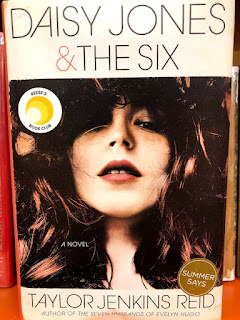 Having discovered Taylor Jenkins Reid at the very beginning of this year, it comes as no surprise that I decided to pick up her new novel, Daisy Jones and the Six. While I thought The Seven Husbands of Evelyn Hugo was an intriguing read, I was not blown away by it like many reviewers have been. I was hoping that maybe this book would get me hooked on Taylor Jenkins Reid, again like many reviewers seem to be. Alas, I think this may be my last Reid novel.

Daisy Jones and the Six tells the story of Daisy Jones, a singer/songwriter growing up on the Sunset Strip in Los Angeles, and the band known as The Six, who are rising rock and roll stars. Both Daisy and the Six make their way up the music ranks in L.A., both eventually catching the attention of the same producer. After hearing them both perform, he decides to recruit Daisy to sing a duet with the Six, particularly its lead singer, Billy Dunne. Both hesitant to the idea, eventually they record the song and are an instant hit. Thus begins their meteoric rise to the top of the charts as Daisy Jones and the Six. But personal conflicts arise with in the band, relationships suffer, drug use becomes more predominant for Daisy, and eventually the band breaks up. They end their careers just as they are achieving the pinnacle  of success, leaving everyone angry and stunned. The novel ends with a follow-up of all the band members and where they are today in their personal and professional lives.

The first thing about this book I did not like was the choice of writing style. Reid tells her novel as if the band members are talking to an interviewer, reliving their lives through stories from the past. I have heard that this transcript format works very well for the audiobook, but when reading it on the page, it gets monotonous and boring at times. Seeing the dynamics of the band through the lens of the characters is great, but all the flipping back and forth is so tedious to read. I also did not feel a connection with any of the characters. Daisy Jones, like Evelyn Hugo, is not a really likable character, and Billy Dunne is a weak male protagonist. He waffles between his love for his wife, his struggle with addiction, and his growing infatuation with Daisy. There is really no growth in his character, and I found myself not liking him at all by the end of the novel. The rest of the band members are not really fleshed out; sure, two of them have a relationship and must make decisions about their future, and one feels as if he is underappreciated and looked over, but in general I learned very little about any of the other Six members except Billy and Daisy. The plot itself was also not very intriguing; hearing the same events through the eyes of different characters did not make the plot move any faster; in fact, it bogged it down considerably, and about a third of the way through this book I was bored. The ending did pick up a little, but not enough to redeem the novel for me. Nothing, from the characters to the settings to the plot, was completely formed and fleshed out, and I just found the overall novel lacking in every way.

Overall, this story felt generic, bland, and boring. The characters were caricatures of 1970's rock and roll stars, and even with the Fleetwood Mac vibe, I did not enjoy this book. If you are a fan of Taylor Jenkins Reid, you may enjoy this one. However, I do not think that her novels are for me.