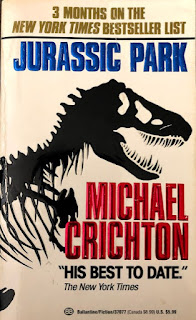 Growing up, I think every kid goes through a phase where they like dinosaurs. For me, that phase has never really ended. At one point I believed I would be a paleontologist like Sam Neill in the adaptation of this novel. I can still spout out the names of various dinosaur breeds and know a dilophosaurus from a velociratpor with just a glance. Having grown up with the films, Jurassic Park has always been in my life. I read the novel years ago, but having both it and the film in my brain causes me to mix up the events of the novel versus the film. Having reread the novel, I am reminded that in most cases, the novel is indeed better than the film.

There's really no need to give you a synopsis of this book; if you haven't seen the film or the subsequent sequels, then where have you been? But here is a quick run down: chaos ensues when an island full of genetically created dinosaurs suddenly loses power and the creatures are allowed to roam free; people die, in sometimes brutal fashion; our heroes escape to tell their story, and dinosaurs are "brought back" from the grave. Its a sweeping adventure tale that, once you get past the science, will have you on the edge of your seat, wondering who will survive and how they will make their escape.

Michael Crichton is known for his science-based action-adventure novels, but this is his most well-known. And for me, the science parts of this novel is where the story seems to lag a bit. Sure, its fascinating to read how an extinct species of creature can be brought back to life through something as simple as mosquito blood, but reading pages and pages of scientific diatribes and explanations gets a little wearing after a while. But, to give Crichton credit, he does explain the science in a way that anyone, whether they are science-minded or not, can understand. It's science speak for the common layman, and for that I was extremely appreciative.

What Crichton does very well is creating tension and suspense within his story. The reader is constantly worried whether Grant, Tim, and Lex will make it back from the animal inhabited parts of the park; whether Malcolm will survive; whether Hammond will ever come off of his high horse and take some responsibility for the creation of Jurassic Park and its creatures. Scenes such as the attack on the main road, the trip into the maintenance building, and Nedry's deception are heart-pounding, terrifying, and will keep you turning the pages as quickly as you can. This novel does not have the PG tone of the film- this novel, at times, is a straight up horror novel. There are horrid dinosaur attacks, brutal scenes of violence and I would not recommend this book for young readers. Aside from the action and horror, at the core of the novel is an essential moral question: just because man has the ability to do something, should man do it? Power corrupts, and having the power to create life from an extinct species is a deeply corrupting power.  Crichton is clearly wanting us to see how this power and the actions of one corrupted person can have significant consequences for not only those around them, but also society at large. In the end, man cannot control nature, and as Malcolm points out, "Life finds a way."

I could go on and on about this book. Having been a fan of the film for so long, rereading the novel only intensifies my love for dinosaurs and for the world that Crichton has brought to life. Even though the sciencey bits can get a little tedious to read, this is without a doubt one of my all time favorite novels and will continue to be so for the rest of my life. My love for dinosaurs will never fade away, just like the images that this book conveys as I soar through the pages. I cannot recommend this book enough, especially if you are a fan of the film.