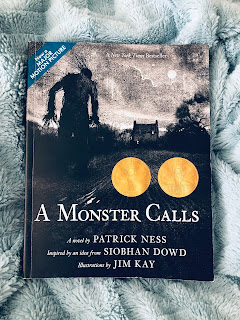 Sometimes, a book really does live up to to the hype. One of my favorite daily activities is to visit various channels on YouTube and hear BookTubers' opinions about popular books. Many of them have praised A Monster Calls by Patrick Ness. As always, when such high praise is given, I am skeptical as to whether it is warranted. This week I decided to pick up this short Young Adult novel and see what all the hype was about. I was immediately hooked,  and as I closed the book for the final time, I instantly knew this was a new favorite book of mine.

A Monster Calls tells the story of Conor, a young boy whose mother is suffering from a terrible illness, his father is living in America with his new family, and he is practically invisible to his schoolmates and instructors. One night, after suffering from a recurring nightmare, Conor awakens to the sound of  a monster in his room: the yew tree from the cemetery next door has COME ALIVE. It tells Conor that he summoned the yew tree and he has come to tell him three stories to help him understand; upon the last tale, Conor will then reveal his truth to the monster. Conor does not understand and claims he did not call the monster to him. Regardless, the monster visits him often and reveals his stories to Conor in a dream-like manner. As he tries to navigate the harshness of his reality with the confusing and sometimes baffling stories from the monster, Conor learns one of life's hardest lessons: how to let go. As the final story unfolds and Conor's truth becomes a reality, he finally understands the purpose of the monster and is able to face the uncertainty of the future.

I am just going to say it: this book is absolutely amazing. I enjoyed every second of reading this novel and found it difficult to put it down. From the very first page, Ness had me hooked to the story and never once did it falter. His writing style is unique, but in a good way; his lyrical style seems to almost float across the page. The plot moves at a great pace, never lagging or feeling boring. His character development is some of the best I have encountered this year, and I could feel Conor's pain and despair on each and every page. It's a coming of age story that anyone with a heart can relate to and empathize with. The relationships between Conor and those around him also felt so real; he feels invisible, and many, apart from his mother, treat him as such. It is easy to see why he suffers so deeply and why the monster is a necessity. Through the monster, Conor is able to understand and let go of his fears and his anger, even though the reality of his situation is difficult. Ness knows how to completely immerse his audience into his story, and this is aided by the beautiful illustrations that accompany the text. I found myself staring in awe at some of the drawings and do not think I could have imagined the images in the book any better than they were drawn.  And for those who do not like a long, drawn out, maudlin story, be happy: this novel clocks in at just 205 pages, illustrations included. Even though it is short, it never feels like Ness cuts anyone's story off short; rather, this book packs a powerful punch in such a short span. This novel, to me, is the definition of a complete story.

This book lived up to the hype and then some. It is, by far, one of the best YA, and best novels in general, I have ever read. Its a story about growing up, letting go, grief, fear, sadness, and learning to deal with all of these difficult issues while facing an even more difficult future. I cannot thank BookTube enough for recommending this book so widely and enthusiastically. Whenever anyone asks me for a good book recommendation, I will immediately put this book straight into their hands. I may not have shed a tear, but my heart broke for Conor, yet I also saw a glimmer of hope in the closing words of the novel. Do yourself a favor and read this one IMMEDIATELY.