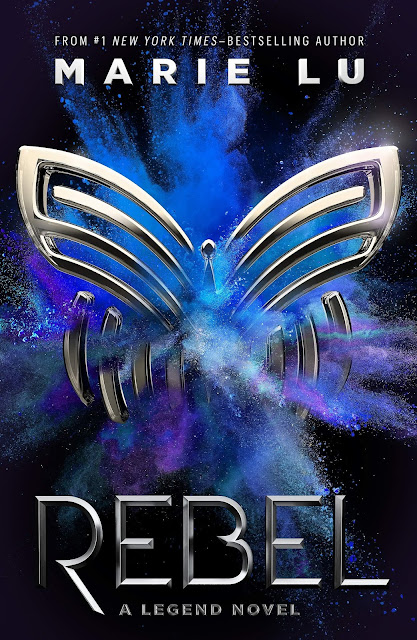 To usher in the new year, I've decided to restructure my book reviews into a list/takeaway format in the hopes that a) it will be easier for readers, b) it will make reviews quicker to write, and thus, c) I will write more reviews!

I cannot stop thinking about Marie Lu's follow-up novel to her dystopian trilogy, Legend. I am an avid reader of dystopian, apocalyptic, and post-apocalyptic novels. The current publishing scene does not lend itself to these types of novels - I blame it on the post-Hunger Games influx of sub-par writing. Therefore, when I happen upon a well-written dystopian novel, it garners all of my attention. Rebel is a phenomenal continuation of Lu's story and deserves much higher than a 4.18 rating on Goodreads!

Here are my takeaways from Rebel by Marie Lu:

1. Characterization is one of the novel's strongest assets.

Eden, Day's younger brother, is the primary character of Rebel and so provides a refreshing perspective on the aftermath of the revolution begun by June and Day. Eden is conflicted without being whiny, and his intellect is a shining point in the novel. For someone so young to be so smart: it's delightful! The internal struggles of Eden are endearing, familiar, and make this a novel in its own right rather than a cheap add-on. We do get snippets of Day and June, but their narratives mostly serve to complete the circle of their journey from the trilogy; Day and June remain consistent in their actions and words, which helped to pull me back into the story. I enjoyed the diversity of the characters as they each display differing qualities.

2. Ross City is what dreams are made of.

Ross City is the capital of Antarctica and where Day and Eden relocate after leaving the Republic. Aside from Hogwarts, I've never wanted to live in a fictional place more. The descriptions of futuristic Ross City are breathtaking and every science fiction nerd's dream. Seriously. Ross City is a technology-driven metropolis where actions, words, even what you buy, has an effect - for better or worse - on your 'score.' The idea of a level-based, game-ified social and economic structure is fascinating to me. I'll leave it there before I give anything away.

3. The interplay between Day and Eden's relationship against the backdrop of social and economic situations in Ross City makes this novel complex, nail-biting, and unputdownable!

I think what draws me to Marie Lu is her ability to take on both the personal and the political/social/economic in equal measure. Rebel is a smart allegory for our own ordinary lives; we learn to orchestrate what's in our control while also seeming to deal with the effects of larger situations. Marie Lu constructs a chilling reflection of society's views on the affairs of both the government and the personal. I have never believed that the Legend trilogy was simply about two brave teenagers overcoming injustice; in the same frame, Rebel continues Lu's candid discussion - veiled in young adult dystopian fiction - regarding our (in)action.

4. There are some beautiful quotes that cannot go unnoticed. I'm talking, print-it-and-frame-it quotes.