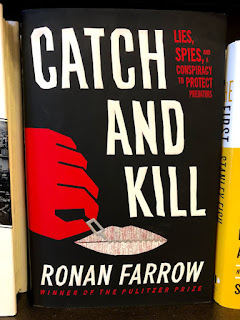 There have been many books written about the "Me Too" movement that has permeated the cultural, political, and social worlds for the past year or so. I had not really been interested in reading literature about the controversial topic, but many Booktubers were commenting on one particular book that they said is a "must-read." Once it became available at my library, I quickly snatched it up.

Catch and Kill: Lies, Spies and a Conspiracy to Protect Predators tells the story of how Ronan Farrow and his friends at NBC and The New Yorker  uncovered and reported on the heinous acts of sexual abuse perpetrated by the Hollywood movie mogul, Harvey Weinstein. Head of Miramax, one of Tinseltown's most prestigious and award-winning production houses, Weinstein was a powerful force within the film industry. Farrow gives us the inside story of how he discovered the scandal being covered up by Weinstein and his cronies and details how he was able to get witnesses to trust him with their story and was able to find someone brave enough to publish the piece. Through his work, Farrow helped to shed light on the actions of a predator and bring some justice for the people affected by Weinstein's crimes.

Farrow's writing is very compelling and easy to follow. He writes the book in such a way that it almost feels like a work of fiction; his narrative style flows so smoothly and coherently that you become lost in the details and cannot pull yourself away from the story. His journalistic instincts do not overwhelm the prose, and anyone, newspaper person or not, can easily read and understand the story that Farrow is trying to convey. He makes you truly feel for the victims of Harvey Weinstein, but does not shy away from revealing the truth behind Weinstein's actions. This is NOT a book for someone who may be a victim of sexual assault, as that is what the content of the book is about.

This book was very eye-opening and it had me hooked from the beginning. The only thing that knocks it down a little for me is the nature of the content. Yes, it was a compelling read, but reading books about such topics are never a fun reading experience. That said, if you are curious about the Me Too movement and one of the biggest sparks of the movement, I highly suggest you read this book. It is a strong book written by a tremendous writer in a way that will have you engaged from page one.