Book Review: A Heart So Fierce and Broken 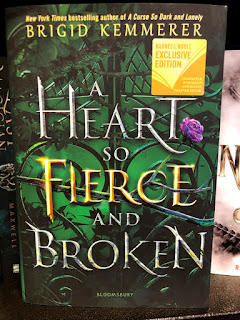 Retellings can be tricky. Last year, I read a retelling of Beauty and the Beast  that really stuck with me. A Curse So Dark and Lonely by Brigid Kemmerer was a great YA fantasy book that I flew through in a couple of days. When the sequel was released a few weeks ago, I was eager to pick it up and see where the story took me. I was, however, highly disappointed by this newest installment.

A Heart So Fierce and Broken picks up where the first novel left off, telling the story of Grey, Rhen's former guardsman, and his journey after finding out the secret of a lifetime at the end of the first book. He meets up with a new character, Lia Maria, the daughter of a harsh ruler in another kingdom. After being passed over by her mother as heir, Lia Maria escapes the kingdom and becomes involved with Grey. As war looms on the horizon, Grey must battle with himself over his true heritage and confront those he used to call friends.

This book suffers terribly from the dreaded "Middle Book Syndrome." Too much of this book is spent on events and conversations that are not necessary except to set up something big for the next book. It was entirely too long and I just could not stick with it. I had hope as I began the novel that this one would be as engaging as the first, but sadly, by about a third of the way through, I found myself skimming through the rest of the chapters to the end.

And the ending.....oh. The "twist" ending was so predictable and completely unnecessary. I can't understand why the author decided to turn the book in that direction for the last five pages, but I was disappointed that she did not come up with a more original plot twist. The novel is told through Grey and Lia Maria's perspectives, and not having Rhen and Harper as main characters really hurt the momentum of the novel. I found Rhen and Harper infinitely more interesting that Grey and Lia Maria, and the little they were in the book was some of the best parts of the book.

Overall, I did not like this book. The first novel was a great retelling that I was completely enthralled with; this one, I was completely bored and unconnected from the characters and plot of the story. I don't understand the hype behind this book- it's feeding off the hype of the first book, but on it's own merit it does not deserve it. If you were a fan of the first one, and really liked the character of Grey, then you may want to try this book. However, I cannot recommend it to all fans of Kemmerer's original novel. I just hope the final book in the trilogy brings some redemption back to this series.