Book Review: The Turn of the Key by Ruth Ware 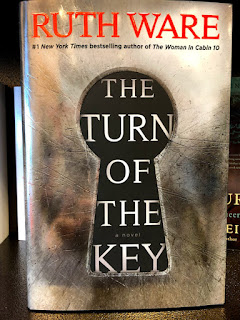 My second foray into the mystery/thriller category for January was one that I was skeptical about. Having heard Kyle's comments on one of her other novels, I was curious to see what my opinion of her writing may be. Sadly, my thoughts seem to mirror his.

The Turn of the Key is a re-telling of Henry James' timeless haunted house story "The Turn of the Screw". Set in the highlands of Scotland, it tells the story of Rowan, a young woman who takes on the job as nanny for a wealthy couple and their three children. The couple are very into technology and architecture, and their house is a smart home- every light, lock and monitor is controlled by an A.I. system called Happy.  She grows to love the three children in her charge, Ellie, Maddie and Petra, and finds a friend in the groundskeeper, Jack. When strange things start happening in the house, Rowan begins to question whether the house is haunted or if something more sinister is going on. By the end of the novel, one of the children is dead and Rowan is suspected as to be the cause.

The novel is framed as if Rowan is telling her story through a letter to a lawyer that she is wanting to take on her case. This framing is clever in the beginning, but it quickly seems unnecessary. Rowan starts the novel in prison for the death of one of her charges, pleading to this man to believe her story and help exonerate her. Ware's writing style is standard mystery/thriller level writing, but the story itself becomes very boring in the middle and last bits of the novel. When the "shocking" twists are revealed (both of which I saw coming), the novel rushes to a finale that feels unfulfilled and lacking. Sure, she leaves the ending ambiguous for the reader to decide Rowan's fate, but getting to that ending did not, at all, make a great story. I was hooked in the beginning, but quickly found myself skimming to get to something more interesting. Unfortunately, there was not much "more interesting" bits to be found.

This was my first, and probably last, Ruth Ware novel. I like her writing style, and her opening had me engaged quickly in the story. The rest of the book, however, quickly fell apart for me and the ending felt anti-climactic and predictable. Ultimately, I cannot recommend this book to someone unless you are already a fan of Ware's novels. If that is the case, you may enjoy this novel. But if you are looking for a mystery that is unpredictable and unexpected, this is not the book for you.