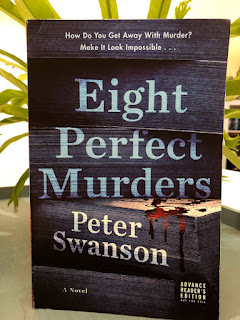 Its always a great feeling seeing the email from Goodreads that says, "Congratualtions....you've won a giveaway!" I have won three books from these giveaways so far, and this latest one had me very excited to read.

Eight Perfect Murders tells the story of Malcolm Kershaw, the owner of a mystery book shop, that becomes a suspect in a string of murders based upon a list he curated entitled "Eight Perfect Murders". This list is based upon the eight "perfect" murders committed in literature, and range from Agatha Christie to Donna Tartt. As Mal and FBI agent Gwen try to unravel the mystery behind the murders, the killer plays a game of cat and mouse, trying to complete the list of murders before he is caught. Mal is also dealing with some personal issues, including the grief from his recently deceased wife. The novel takes lots of twists and turns, and by the end readers do not know whether to trust the things Mal is telling us, or if he is in fact hiding a much bigger secret.

What.....was.....this.....book? From page one, I was completely hooked; Swanson has a way of getting his readers engaged immediately in his story. I zoomed through the first third of this novel with ease and excitement to see where it was going. By the time I got to the second third, however, the novel began to lag and the perspective shifts of the novel had me a bit confused. Mal also became more unlikable as the novel progressed, which I guess it how we are supposed to view his character. The twists that were slowly, but very confusingly, revealed throughout the last two-thirds of this book actually made me not like the book as much. They started to take me out of the novel and I found a lot of them unnecessary. By the end, I was seriously questioning what this book was trying to do. When I finished the last page, I said out loud, "Well, that did not go like I expected." This is my first Peter Swanson novel, so I am unsure whether all of his novels are like this, but if they are I am not sure I want to read another one.

Overall, this book had a great beginning. I was completely sold and eager to see where the story took me. But the snail's pace in the middle of the book and the confusing and unnecessary plot twists did not help keep that momentum going for me. This book was not horrible by any means; I just had higher expectations because of the amazing opening of the novel. If you like twisty, turny murder mystery novel, especially ones based on other mystery novels, then I think you may enjoy this book. It's not for everyone, but give it a try. You might find yourself enjoying this book.

My thanks to William Morrow Publishing and Goodreads for sending me this ARC. Eight Perfect Murders is now out in bookstores.