Book Review: When We Were Vikings 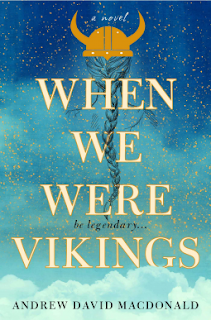 You ever read a book and it just feels.... weird? Not weird in a bad way, just weird. That feeling stayed with me as I journeyed with Zelda through her quest to become a hero.

When We Were Vikings tells the story of Zelda, a young adult who suffers from Fetal Alcohol Spectrum. She is very high functioning, yet she still needs help in some areas. She lives with her brother Gert, a very smart but troubled young man, and she has a boyfriend, Marxy. Zelda is obsessed with all things Viking and is on a mission to become a legend in the Viking world. When her brother becomes embroiled in trouble with the local thugs, Zelda uses this as her opportunity to save her brother and become the Viking she believe she should be. In the process, she learns a lot about the world and herself, discovering more than just her Viking calling.

Like I said before, this book just felt odd to me. From the first few pages, I never fully connected with the story or the characters. None of the characters caused me to become attached to them, and I wasn't really surprised or shocked by any of the events of the story. I did enjoy seeing Zelda grow up a bit, becoming more aware of herself and more independent by the story's end.

Overall, it was a good debut novel, but it was easy to see that this was a first novel. If this author publishes more books, I would be inclined to read them. I think readers of all kinds will enjoy this story and following Zelda on her journey of self-discovery.

My thanks to Gallery/Scout Press for an E-ARC of this title.