Double Book of the Month Review: The Sun Down Motel by Simone St. James and Valentine by Elizabeth Wetmore 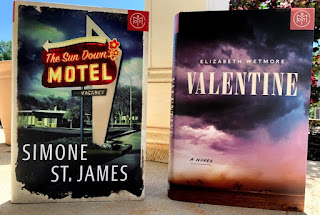 I have been a member of the Book of the Month subscription service for about half of a year now, and through this service I have discovered a lot of new and interesting books. I also love the fact that I get a brand new or early release of a hardback book for $14.99 a month. During this quarantine time, I am able to catch up on a few of my BotM selections that I have gotten behind on in recent months. The two books I will be reviewing today could not be more different from one another- this is why I love this subscription service, the books are always a diverse selection. 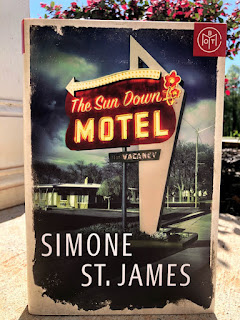 The Sun Down Motel was my January pick for BOTM and is a mystery/suspense novel written by Simone St. James. It tells the story of two women: Viv, a young woman in upstate New York in 1982 who takes a night shift job at the seedy Sun Down Motel as the front desk clerk, and her niece, Carly, who is following in her aunt's footsteps looking for answers. One night in 1982, something very strange occurs at the Sun Down Motel and Viv disappears without a trace. Carly, grieving her mother's death and feeling alone in the world, goes in search of what happened to her aunt all those years ago, desperate to know the truth. She visits Fell, the city where the Sun Down Motel is located, and meets with people who knew her aunt in 1982. She even takes the same job as her aunt at the Sun Down. When the same strange occurrences begin plaguing Carly at the Sun Down, the truth about what happened all those years ago will be revealed.

This novel was very intriguing. It had a very spooky atmosphere throughout, and every time something started happening at the Sun Down, my spine started tingling. St. James clearly knows how to creep her audience out, and I found it difficult to read this book at night. She also developed her characters very well, particularly the main characters of Viv and Carly. I felt like I knew them very well by the end of the novel, and even the side characters were interesting throughout. Her prose is easy to read and follow, and even though the novel switches between two timelines, there is no confusion when reading; you can clearly distinguish between the two timelines thanks to St. James's writing style and structure of her novel. The only negative aspect of this novel is that it lags just a bit in certain places, so it could have used a little more editing to parse out those unnecessary bits. Overall, I would highly recommend this novel to those readers who love thrillers and suspenseful stories; this one is very original in its content and I can't wait to read more of Simone St. James's work. 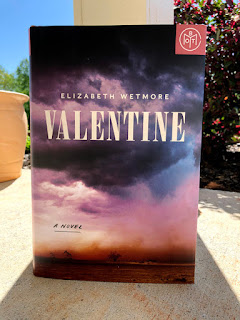 Valentine, my April BOTM pick and a Jenna Bush Hager book club selection, is a debut novel from author Elizabeth Wetmore. It intertwines the stories of five women living in 1970's West Texas. When Gloria Ramirez is assaulted on Valentine's Day night, the entire town of Odessa becomes embroiled in the drama surrounding the trial of the man who assaulted her. The story also details the lives of four other women in the town: Mary Rose, a young mother of two who is the first person who sees Gloria after her attack; Corrine, an elderly lady dealing with the death of her husband; Debra Ann, a ten year old girl whose mother has abandoned her as she makes a new friend in town; and Ginny, Debra Ann's mother who has left Odessa and her family behind for a better life. The lives of these women all connect in one way or another, and all are affected by Gloria and what she experienced.

*First: trigger warnings for this novel for domestic assault and abuse, racism and sexism. They are pervasive throughout the entire book.*

I'll be honest: I was very excited for this book when I saw it as an option for Book of the Month. However, very quickly into reading it, that excitement waned. The novel opened very well with Gloria;s perspective, immediately immersing the reader in what happened to her without going into too much detail as to turn the reader off. However, each chapter then switches perspectives between these five women, almost to the point that it is difficult to distinguish between them at times. I had to ask myself who I was reading about each time the POV changed. And besides Mary Rose and Gloria's POVs, the rest were not that interesting nor integral to the plot of the story. That was my biggest problem with this book: it was all character development with little to no plot. If I am going to invest 300+ pages, I would like the story to have a plot and character development, not one or the other. The perspective shifts themselves also switched between the present and flashbacks to the character's lives prior to the incident with Gloria, which made reading it even more confusing. The ending sort of came together, but not very succinctly, and I predicted that the trial would conclude as it did. Some reviewers are complaining about the lack of quotation marks around dialogue, which I understand; that said, having read Cormac McCarthy novels prepared me for this so it did not bother me as much.

Overall, it was clear that this was a debut novel- the author felt it necessary to tell us everything about these women without their being a real purpose for it. I did not connect with any of the characters and found myself rushing to finish it about halfway through. If you like slow, character driven novels with little plot, then you may enjoy this book. I, however, will not be recommending it to any of my friends.