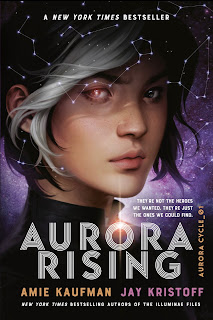 I really, REALLY enjoyed reading Aurora Rising by Amie Kaufman and Jay Kristoff. Having purchased it as a Kindle deal, I didn't expect much from this sci-fi installment (it was really dumb of me to disregard the authors of the text -- I am not sure I even looked before I purchased it). However, I am extremely excited to say that this book will be in my top books of the past year!

Aurora Academy graduate Tyler Jones wasn't there to pick his crew. Being the stereotypical hero, Tyler was off on a heroic mission to save a "damsel in distress" who was found floating in a cryptopod in interdimensional space.  Having to pick between saving a life and graduating from the academy, Tyler does what is expected from any leader even though he misses his pick of crew and is left with the remainders. The novel is set around an unlikely space crew of an outcasted brigade of characters who were all but unwritten by their society as being the ne'er-do-wells because of rank, status, etc. Tyler, with the help of his sister Scarlett, will have to lead effectively if he is to complete his first mission without too many mishaps. When the 'damsel' has a hidden past that is a destructive as a Syldrathi's response to unwanted affection, the crew are led to search for answers while being tailgated by one of the most interesting villains I have read in a while.

Here's the thing-- you don't want to begin this book when you don't have the time to finish it because it will keep you up at night and leave you scarred from the battle scenes. It has a bit of the Guardians of the Galaxy humor I adore mixed with the creativity reminiscent of Illuminae (another Kaufman & Kristoff you don't want to miss!).