Book Review: The House That Fell From the Sky by Patrick Delaney 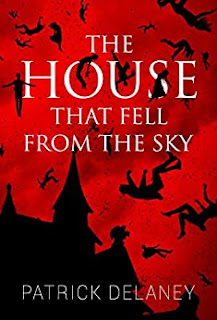 With quite possibly the most intriguing cover I have seen in a while, I couldn't help but pick up The House That Feel From the Sky by Patrick Delaney. Like the house in the story, I feel this book simply fell into my hands and demanded to be read.

The sci-fi/thriller combo features a protagonist named Scarlett Vantassel who is at her quarter-century crisis of dealing with adulthood after attempting college and settling back home when things simply did not work out. However, she soon discovers that home looks very different ever since a sinister-looking house miraculously falls from the sky and lands in the city center. As expected, the media is chaotic trying to find answers that simply may not exist about the house's contents, the way the house seems to negatively affect people, and the origins of the mysterious mansion.

Scarlett's friend Hannah has an obsession with the house that continues to stem from ghostly events surrounding the house along with the relatively recent death of her mother. Could this house hold the answers to unlocking the secrets of the afterlife?

When a privately own company takes control of the house and holds a lottery for entering, Hannah decides to use her wealth to find a way into the house leading Scarlett and other important characters with a choice to help their friend or stay away from the ominous secrets that await.

I felt that this book had great potential to be a frontrunner in the genre with the way the author writes the action sequences and setting, but the lack of characterization left me often questioning who was who. I kept getting Scarlett and Hannah confused and often had to take time to reread to clarify important plot points that were pushed aside for the action and thrill.

There were times when I had to ask if the plot was too outrageous to believe. At first, I really felt this book had the potential to captivate readers who, like myself, have read extensively through the genre, but the lack of willing suspension of disbelief was hard to follow. Once inside the house, I was left wanting more than the mixture of events I was given; I simply could not imagine it even when dealing with material that seems to be inspired by the works of Lovecraft, King, and Poe. I wanted to believe that these characters were in danger, but I honestly lost my compassion for their struggle as the Willy Wonka-gone-wrong ending with the magician seemed to add layers that were improbable at best and underdeveloped. Had the final chapters been really fleshed out, I feel this novel could have been competitive and realized.

I do have to commend the author because the plot was as not derivative as other newly published novels we are seeing in the horror genre. I failed every time I tried to relate the text to another, more familiar book, movie, or show. I saw connections with Under the Dome, 13 Ghosts, and The Shining, but each of these connections existed only in relating the material to create visualizations and understandings. I never felt the plot already existed in another novel which is commendable given many of the horror books I have read over the past few years.

Thanks to NetGalley and Oblivion Publishing for the ARC of this novel in return for an honest review.
Labels: Book Review Kyle Mystery/Thriller/Suspense Netgalley