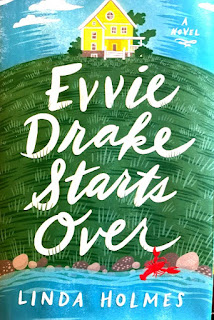 Ever see a book cover and think: "I really like the cover, but would I really like the story behind that cover?" I am not one who usually reads "chick lit," but this summer I have decided to branch out and try some lighter, more romantic stories to fill my time. I had seen Evvie Drake Starts Over in the store many a time, but just now finally settled myself into reading it. I am so happy that I decided to try something new: this story was absolutely wonderful.

Evvie Drake Starts Over tells the story of Eveleth "Evvie" Drake, a woman who, on the day she decides to leave her husband, gets a phone call that he has died. Struggling with how to grieve such a situation and dealing with those around her, Evvie decides to rent out the built-in apartment of her home to a struggling baseball player, Dean. Dean has just retired from pro-ball after developing a case of the "yips" and is unable to pitch. With Dean's help, and her own determination and willpower, Evvie finds the balance her life has been missing since the loss of her husband and comes into her own self. She finds the strength to let go of the guilt she felt about her husband and her actions concerning the day of his death and move on with her life. And, of course, she gets her happily ever after in the end.

I flew through the pages of this book. Evvie is such a remarkably relatable character- not in that I have lost a spouse but in that "trying to figure out who you are and what your purpose is in life" way. I related to her struggles and admired the courage she had to accept those struggles and face them head on. Her realization that her husband was a not so nice man helped her to move on and come to terms with her feelings. I adored her and Dean as a couple; he was not a "knight in shining" armor trope, but rather a catalyst for Evvie to not only help someone else, but finally decide to help herself. She didn't need Dean to save/rescue her, he simply helped her find the path to being the new Evvie Drake. And Evvie's belief, faith and encouragement of Dean and his passions made her even more likable as a character. The only character I had trouble with was Evvie's best friend, Andy. He seemed too dependent on Evvie and pretty much abandoned her when she needed a friend the most. And yes, the ending may be a tad bit cheesy, but in the end I feel Evvie deserved her happily ever after, as did Dean. They earned it throughout the story; it wasn't simply given to them to wrap up the narrative.

Overall, I had a wonderful time reading this novel. The prose is quick and easy to read, and you will instantly fall in love with Evvie and most of the characters in this novel. Yes, it includes a romance, but the story is more about a woman discovering who she is and letting go of the past in order to become her best self. And that, I think, is something we can all learn from Evvie Drake. I would recommend this book to everyone- it's a great summer read!