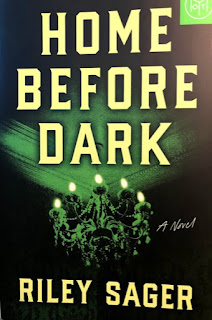 It's been a while since my last review, as 2020 has been an interesting year. My reading definitely suffered this year, but I seem to be getting back on track with my recent reads. As it is October, I am trying to read more scary, spooky books to get into the Halloween mood. My first book that fits into these categories is one I have had on my shelf since the summer (it was my June Book of the Month selection), but was waiting for the right atmosphere and mood to pick it up. I have read two of Riley Sager's books previously: Final Girls, which I gave four stars and devoured very quickly, and Lock Every Door, which I gave three stars and had some issues with, especially the pacing and characters. My third venture into his thrillers, Home Before Dark, had me captivated from the very first page.

Home Before Dark tells the story of Maggie, a woman who, as a child, fled a supposedly haunted house with her parents after less than a month of living there. She lives in the shadow of the book published by her father on their time at Baneberry Hall and has never believed the story of the house being haunted. When her father dies and leaves her the house, she decides to put her house-flipping skills to work to fix up the house and sell it. Little does she know that by returning to Baneberry Hall, the secrets of the past will come flooding back to her and she will learn the truth about what happened all those years ago.

As I said, this book had me hooked from page one. I was very intrigued by the dual timelines of Maggie in the present and the chapters of the past from her father's book. It was interesting to see the intersection of the events from the past and how these events echo into the present. Maggie as a main character works well as our eyes into the story, being relatable and capable of taking care of herself. Her relationship and trust of Dane, the handyman and groundskeeper of Baneberry Hall, seems a little rushed, but it is not a significant part of the story. The book lagged a bit in the middle and could have been edited down just a bit, but the tension and suspense Sager creates throughout the novel is palpable. The best part of the story came at the end, with not one but two surprising twists that I did not see coming.

Home Before Dark was a thoroughly enjoyable read, full of surprises, scares and suspense. If you are looking for a quick, fun Halloween read that you won't want to read at night, then pick up Sager's latest novel. It definitely creeped me out in some places, but I had a great time reading it.