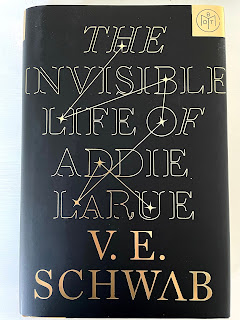 Everyone who is a reader has a list of their most anticipated books for the year. Near the top of my list for this year was V.E. Schwab's newest novel, The Invisible Life of Addie LaRue. Having read the first in her Villains dulolgy, Vicious, I was curious to see whether I would continue to like her writing. As the release date for this book became closer, the hype for this book was astounding. Everyone was talking about how absolutely amazing this book was. Book of the Month then decided to include it as one of their monthly choices for October, and it became clear that I needed to read this book. And, boy, am I glad that I did.

The Invisible Life of Addie LaRue tells the story of a young woman, Adeline LaRue, born in France in the 1700s. When forced into an arranged marriage that she is completely against, she runs to the woods and makes a deal with the devil: she wants to be free. This means she receives immortality, but as soon as someone turns from her, they immediately forget her. She is left alone in the world, unable to leave her own mark upon it. She wanders for three hundred years, seeing new sights and watching as history unfolds around her, never able to really be a part of it. That is, until one day, she enters a bookstore and the shopkeeper, an man named Henry, remembers her. Suddenly her life is turned upside down and she sees this as a chance for love, to be remembered.

As with Vicious, Schwab's writing is superb. She worked on this book for years, and it is clear to see her dedication to these characters. Each are fully developed and alive on the page, and Addie's struggles in particular are clearly made as we flash between her present in 2014 New York and her three hundred year journey across time and history. Her journey is not an easy one, and Schwab does not shy away from the struggles and realities that a young, single woman would face during the 18th-20th centuries. Henry, likewise, is an interesting character whose problems are just as great as Addie's, making them a pair of broken individuals seeking to be put back together by love and acceptance. Schwab's words simply float off the page, and once you being the story of Addie LaRue, you cannot put it down. Though the book is nearly 450 pages, the story flies by and you become completely immersed in the world. There could have been a bit of editing done towards the middle of the text, where scenes became a bit repetitive, but even then the prose is so wonderful that I can overlook that one weakness. My one complaint, though, is the final scene of the book- I wish it had not been tacked on, leaving the book seemingly open to more story even though it is a standalone novel. That alone is my only issue with the book; everything else is simply splendid.

If you are looking for a time-spanning fantasy novel that is beautifully written, full of suspense, romance, and wonderfully developed characters, then read this book. It is a standalone, so no need to worry about starting a series. This book is by far one of my favorites for this year, and it makes me excited to read more from V.E. Schwab.